Planetary Romance is simply continuing the age-old literary tradition of focusing on romantic storylines. This type of story explores the implications of science-fiction for love. As our world develops and changes, how will romantic relationships be impacted? As we explore new worlds, will new possibilities for love and reproduction arise? Planetary romance is a type of sci-fi more than willing to delve into such matters! We’ve included a mix of conventional planetary romances here, and some other sci-fi stories we think will be of interest to those of a romantic persuasion.

Dune may seem a strange choice to feature on a list of planetary romance, but no reader can deny the emotional potency of Herbert’s work. It is perhaps one of the most immersive and popular science fiction stories of all time, drawing in a wide range of readers. The book also serves an extra dose of topical relevance, thanks to its ecology-focused approach. The emotional and gender aspect is explored masterfully here, so romance fans will find a lot to enjoy.

A Princess Of Mars is one of the oldest tales found here. Edgar Rice Burroughs set the template for early science fiction, in terms of its historical/fantastical feel, not to mention its focus on interplanetary amour. For fans of vintage science fiction, or anyone interested in checking out some of its earliest romance scenes, A Princess Of Mars is well worth a read.

The Space Trilogy (Out of the Silent Planet, Perelandra, That Hideous Strength) by C.S. Lewis (2011) Paperback
$23.97
Check It Out on Amazon!

CS Lewis is a deserved legend within the world of science fiction, fantasy, and even religious writing, thanks to his ability to communicate effectively within all three. In his Space Trilogy, Lewis borrows from and skillfully wields ideas taken from religion, language and mythology. He also manages to add an emotionally involving romantic storyline. Kudos to CS.

Of course, romantic science fiction can exist outside of the tired and cheesy cliches of the romance genre. In fact, in traditional literature, romance was meant in the broader sense, as in ‘a romantic notion’. In his Demon Princes saga, Jack Vance tells an epic tale of revenge of one forced to fight back when the freedom of his people are taken from them. Told over five separate stories, this is effective science fiction revenge, sure to stir romantic feelings in even the coldest of hearts.

Naturally, for a Robert E Howard story. Almuric is full of pulp science fiction goodness coupled with a heavy dose of planetary romance. Although set away from Planet Earth, Almuric reads similarly to fantasy, in the sense that it’s full of mythical beasts and baddies. If you want a fun, frenetic science fiction flavored slice of fun, look no further than Almuric.

Courtship Rite, originally released in the 1980s, is a well-regarded sci fi story to this day, having been nominated for a Hugo Award before finally winning a Prometheus Award in 2016. The story focuses on a planet where humans are present, but little else is Earth-like. Donald Kingsbury has created an immersive biological and social system in which the reader is inevitably drawn into a courtship rite of their own with this tale. 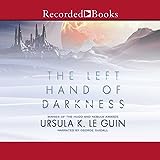 The Hainish Cycle takes in a group of stories from Ursula LeGuin which share some links and shared features, but aren’t explicitly a structured series. The plot deals with an existence in which humans have been colonized and bred into different types of groups, awarding them special powers and functionality as a result. This results in an enjoyable as well as immersive world.

Riverworld: Including To Your Scattered Bodies Go & The Fabulous Riverboat (Riverworld, 1)
$18.89
Check It Out on Amazon!

A thrilling introduction to the Riverworld series, To Your Scattered Bodies Go deals with the metaphysical and spiritual implications of space. What happens if you die midway? Is there a realm beyond the one we perceive? Farmer’s story blends together the best parts of science fiction, humanity’s romantic quest for meaning, and religious style mythology. A unique and puzzling read.

The Sky People is an incredible blend of political sci fi, planetary romance, and good old fashioned space exploration. It deals with a world where many of humanity’s powers have sought to colonize space rapidly. The story is set on Venus and offers equal parts stunning sci fi and relatable romance. Fans of dinosaur stories will also have a lot to enjoy here, thanks to the presence of ancient beasts.

Lord Valentine's Castle: Book One of the Majipoor Cycle
$16.00
Check It Out on Amazon!

Silverberg’s opening book of the Majipoor Cycle introduces the reader to a complex world, governed by many different species and belief systems. It does a fantastic job of painting a complex portrait of the interactions between the different elements of the society, and the guiding principles on which it is based. Lord Valentine’s Castle also features a legendary main character who is sure to delight and intrigue the reader.

Without spoiling this New York Times Bestseller, it features a unique main character torn in impossible directions. Torn between romantic possibilities. Worlds. Civilizations. If you’ve ever felt lost, or unable to decide where to place your faith, then you’ll find a lot to relate to here. The perfect mixture of science fiction, political drama, and good old fashioned heartache. Embassytown is proof that the tradition of romantic science fiction is in very safe hands with China Mieville.

CJ Cherryh has truly earned the status of ‘science fiction titan’ and her Foreigner series is a perfect jumping off point. The story explores the tensions between a group of settlers and the original inhabitants of an alien world. The status and mistrust given to the humans is intriguing, and has many parallels with the genuine human condition. Can we get on with those different to us? Can we even move beyond tolerance into something more meaningful? CJ Cherryh’s Foreigner is the perfect place to decide.

One glance at the cover of The Ginger Star by Leigh Brackett will show you’ve arrived in premium pulp science fiction territory. Expect the classic blend of fantasy, sci fi, and romance which characterizes this fun and escapist side of the genre. Not sure about Brackett’s credibility? She wrote nothing less than ‘The Empire Strikes Back’. Enjoy!

Like many of the romantic science fiction stories found here, The Coldfire Trilogy by CS Friedman deals with the ultimate question of the heart - what is humanity’s relationship to universe? Is there a greater power at work? Can we vibe with it? All these questions are explored wonderfully by Friedman, in the location of an Earthlike planet with significant ecological and mystical depths.

This is a really obscure sci-fi read for the true fans only. Dedicated to Poul Anderson, a close personal friend of Francis Carsac, the book deals with an interplanetary invasion, and the consequences that ensue. If you consider yourself a sci-fi obsessive, you need to find a way to read this.

Is Planetary Romance An Established Form Of Science Fiction?

Yes, planetary romance is one of the oldest types of science fiction out there. Some of the earliest stories to be set in space where essentially romance genre fiction set on an alien world.

Planetary romance is such a core part of old-school sci-fi that some of the book covers, and pulp magazine covers, are absolutely iconic. Picture a space hero saving a sci-fi version of the damsel in distress, and you’re thinking along the right lines.

Does Planetary Romance Always Make Use Of Sci-Fi Convention?

Due to the age of planetary romance, not all of the stories contain the types of objects that we would typically associate with science fiction. This is some crossover with fantasy and magical fiction. On the other hand, many stories are out and out sci-fi, just with a strong romantic bent.

So what are some of the ways in which planetary sci-fi does and does not conform to sci-fi convention?

As you can see, there is scope for planetary romance to move outside the conventions of traditional sci-fi. If you are an experimental, open-minded science fiction reader, this could be a good choice of genre for you.

What Kind Of Characters Are Found In Planetary Romance?

Planetary romance, and romance fiction in general, isn’t exactly known for its in-depth, complex characters. Instead, the characters tend to be more similar to those found in pulp sci-fi, namely shallow and serving only to further the plot.

So what are some of the types of character you are likely to encounter in planetary romance?

If you’re looking for in-depth, complex sci-fi characters, you should look elsewhere! However, if you are comfortable with fun and lightweight characters that further the plot, you’ll have no problem with planetary romance.

Get These Best Planetary Romance Books for Free!

If you're keen to check out some of this planetary romance for yourself, here are a couple of ways you can do that.