In our opinion, Kurt Vonnegut is as emotionally and intellectually complex as a Sci Fi writer--or any other genre--can get. But that does not mean you should any of his titles. In fact, I'd encourage every last one of you reading this to hunker down with a Vonnegut novel whenever you get the chance.

Not sure where to start? Well you're in luck. Because we've put together a list of the best Kurt Vonnegut books out there.

Again...this is our opinion. I know there's others that can be on this list. So, if you don't see your favorite or think something should be ranked higher....Please let us know! We value your input. Now let's talk Vonnegut!

Oh! And by the way if you want to check out any of these titles for free, you can with Audible's one month free trial!

It's easy to see why Cat's Cradle is considered to be one of--if not--the greatest's of Kurt Vonnegut's novels.

The novel starts off with John (the narrator) doing research on Felix Hoenikker, a co-creator of the Atomic Bomb. While getting close to Felix's children, he discovers that the bomb wasn't really Felix's most dangerous creation. Instead, that honor goes to ice-nine--a molecule that could freeze all water on Earth at room temperature. And that it's been distributed amongst Felix's unusual offspring.

The book is an apocalyptic chock full of dark humor and satire, a religion dedicated to a calypso dancer, and an outlook on the future that is terrible at best.

Slaughterhouse-Five: A Novel (Modern Library 100 Best Novels)
$7.79
Check It Out on Amazon!

Slaughterhouse-Five is truly a unique and immersive read. The story follows a one Billy Pilgrim--American soldier, chaplain's assistant, and POW after the bombing of Dresden. And while it has the marks of great sci fi (i.e. time travel with satirical dark humor), the novel is also considered to be semi-autobiographical.

Vonnegut himself was a POW during the bombing of Dresden and only survived through seeking shelter within the meat locker of the local slaughterhouse.

This is easily one of the most uniquely imaginative and funny sci-fi reads of all time.

The Sirens of Titan
Kurt Vonnegut

Vonnegut had this brilliant way of making the most bleak of situations seem lively and even funny. And that definitely rings true with this novel.

When the richest, most depraved man on Earth is offered the chance to explore the galaxy with a stunningly beautiful woman at his side...how could he resist? However, things aren't exactly peaches and cream. A haunting vision reveals the true nature of human life, and it doesn't necessarily bode well for humanity.

This book served as one the main inspirations for Douglas Adam's The Hitchhiker's Guide to The Galaxy.

Breakfast of Champions: A Novel
$9.29
Check It Out on Amazon!

This book is Vonnegut's onion. Not because it stinks and make you cry, but because there's no many layers to it.

The plot is actually developed by a character in the book named Kilgore Trout who writes pitiful nonsense of Sci-fi. And who now believes that through his writing, he is creating the universe around him. Trout doesn't take this well and we begin to see his psyche unfold.

Oh and by the way, Vonnegut writes himself in as a character as well. A character who is writing the story of Kilgore Trout. This book breaks third and fourth walls as if they were nothing.

While many of Vonnegut's books are blatant satire, this one gets a bit emotional and deep.

While awaiting his war crimes trial in an Israeli prison, Howard Campbell Jr. finds himself in front of a familiar instrument. A typewriter--very similar to the one he used as a Nazi propagandist for Goebbels. And he finds that there's no better time than the present to write his memoirs.

In this book, Vonnegut's satirical nature really shines through.

Eliot Rosewater is a drunk, volunteer fire fighter, and the town's richest man. He's valued at around $80 million dollars which he mostly uses to help the people around his town. And he doesn't just give for those in real need. Essentially if you want something, Mr. Rosewater provides. But Rosewater's family doesn't quite agree. And they're looking to find a way to put an end to his madness for something bigger and more important.

Welcome to the Monkey House: A Collection of Short Works
$12.19
Check It Out on Amazon!

Welcome to the Monkey House isn't a single novel. Instead, it's a collection of some of Vonnegut's shorter works and stories.

The title story (Welcome to the Monkey House) is all about the how the government has figured out a way to physically remove the orgasm from sex. This of course is all done for the "betterment of mankind".

Now, this book is not politically appropriate for today's modern era. Written and compiled in the 1950's, there are many things in this book that are no longer socially acceptable (and rightly so). However, it is a very wonderful book for the open-minded and thick-skinned.

In a world dominated by a supercomputer and controlled by machines, engineer Paul Proteus must find a way to survive. But Paul doesn't just want to survive...he rebels.

The warnings that Vonnegut puts in here about automation are so thick you can almost taste them.

Slapstick or Lonesome No More!
$14.75
Check It Out on Amazon!

As you'll see below, Vonnegut gave Slapstick the lowest grade out of all of his novels. And while we understand Kurt's brilliance, we don't necessarily agree with him on that point.

Slapstick is considered to be one of his most autobiographical works--even more so than Slaughterhouse-Five. It follows fraternal twins who have a sympathetic and implied telepathic communication. This is alleged to be a direct inference with Vonnegut's relationship with his own sister who dies young of cancer.

But alongside the actual human bond in the book, it's a awesome sci fi book with technologically miniaturized Chinese invading America.

It's hard to determine which is more interesting: Vonnegut's novels or his real life.

Born into a wealthy brewing family, Vonnegut's early childhood was that of privilege. But that all changed during the onset of the Great Depression and Prohibition. Unlike his older siblings--who had already finished private education--Vonnegut was quickly ushered into public schooling due to his family's misfortune.

And Kurt's schooling wasn't the only thing to change in his life. His father isolated himself away and his mother began to suffer depression. However, he found solace in writing for his high school newspaper--something he found that came naturally to him.

After high school, he attended Cornell University. His elder brother insisted that he study a "useful discipline", and he took up biochemistry. But that didn't last. Due to his poor grades and satirical entries to the college and local papers, he soon dropped out of school. That proved to be bad timing for him.

At that time, the Japanese had just attacked Pearl Harbor. He was no longer eligible for student deferment and wound up enlisted within the US Army. The added stress of Kurt's soon-to-be overseas deployment was too much for his mother. And on his Mother's Day leave, he came home to discover his mother had committed suicide the evening prior.

Shortly after, he was deployed and fought in The Battle of the Bulge. His division was quickly overrun by German forces and--in 1944--became a prisoner of war. He was transferred to a prison camp outside of Dresden. Fortunately for him, the Germans had him working in a slaughterhouse just inside the city. And when the Allied forces bombed and retook the city, Vonnegut along with a few others took refuse in the slaughterhouse's underground meat locker.

Upon returning to the states, he utilized the GI Bill to finish college and married his high-school sweetheart. He was able to pick up a job at General Electric as a publicist. However, not satisfied with his job at GE, he eventually quit and began writing full time. His first novel, Player Piano, was released in 1952.

Kurt Vonnegut's writing is easy to pick out from a crowd. It has a unique style and structure unlike any other. And that's because he employs three major tactics to write his books.

Why Should You Read Kurt Vonnegut?

It's difficult to truly comprehend the breadth of Kurt Vonnegut's genius. His writing is a neat juxtaposition of good and bad fortunes (after throwing away all to do with them) that takes places linearly all at the same time.

Make sense? I didn't think so. But Vonnegut made it work.

Here's a great TEDEd that sheds some light on his perspective:

Kurt Vonnegut Grades His Own Novels

It's not hard to imagine that a man who literally builds geometric equations for his books and novels would grade his own work.

Now, his personal rankings range from A-plus to D. But that doesn't mean that a self-imposed D is a terrible book. As a matter of fact, his only self-prescribed D belongs to Slapstick--#9 on our list. It just means that he personally felt that he could have put more effort into the book and created something better. 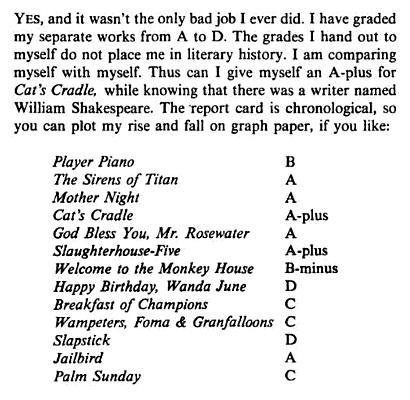 We're not sure how because Slapstick is AMAZING as is. As you'll see, however, he did give himself two A-pluses--for Cat's Cradle and Slaughterhouse-Five. No surprise there.

Get These Best Kurt Vonnegut Books for Free!

Are you looking to get any of these Kurt Vonnegut books? Check out how with one of these two offers!

2. If you want to try something other than Audible you could also try Playster. Playster's One Month Free Trial works with either ebooks or audiobooks. You can pay for a membership at $14.95 per month and receive unlimited books. However Playster does not offer as many book options. If you would like to listen to all of Playsters books you will need to use the premium which is $29.95.