​Since science fiction first became popular, authors have been dreaming up new and terrifying ways to envision the world ending. Whether through war, alien invasion, or mankind's own foolishness, all these books describe Planet Earth coming to a severe end. If you want a taste of the best end of the world science fiction, look no further.

Cat’s Cradle by Kurt Vonnegut is proof that end of the world sci fi can have serious literary clout. Vonnegut is widely regarded as one of the best writers of the modern era. The plot line deals with the impact of a nuclear catastrophe, and the environmental havoc that ensues. Such heavy themes are tempered by Vonnegut’s trademark use of dark humor and ironic themes. Cat’s Cradle works both as a fine work of end of the world science fiction, and a standout literary achievement in its own right.

​The Sheep Look Up
​John Brunner

As you would expect from a sci fi tale dealing with the end of the world, The Sheep Look Up makes for great a bleak read. The story centers on the dystopian way in which society unfolds following serious environmental collapse. Unlike many more fantastical imaginations of end of the world sci-fi, The Sheep Look Up is grimly truthful, even being called prophetic by many modern environmentalists. John Brunner’s vignette style of narrative is gripping and makes the reader take in the implications of environmental damage from many angles and perspectives.

​The Death Of Grass
​John Christopher

John Christopher's The Death Of Grass is proof that sci-fi authors have long imagined the consequences of environmental damage, having received its original release back in 1956. The story imagines what would happen if a virus destroyed all grass on Earth, and the consequences of this occurring. The human element of the story deals with a group of survivors making their way across England. Along the way, they are forced to choose between brutal alternatives in the name of survival. Like all of the best sci-fi, The Death Of Grass forces the reader to imagine what they would do in a similar scenario.

The Andromeda Strain
$12.99
Check It Out on Amazon!

Lucifer’s Hammer by Larry Niven and Jerry Pournelle is an incredible example of end of the world, packing in a wide array of apocalyptic events. If you want comets hitting Earth, epic environmental events, and nuclear war, this is the book for you! Lucifer’s Hammer is able to mix together credible science with a gripping plot line in a way which will satisfy sci-fi fans from across the spectrum. One of the all time great end of the world stories.

Station Eleven represents a change of mood and tone from most of the books on this list. While most end of the world fiction envisions the aftermath of a large scale event as being horrifying and violent, Station Eleven takes a different tone. After a pandemic has killed the majority of people, a group of survivors make it their mission to travel the country and entertain others. End of the world fiction and the term heartwarming rarely are found in the same sentence, but Station Eleven is an interesting exception. A great choice for readers bored of the usual post-apocalyptic tone and tropes. 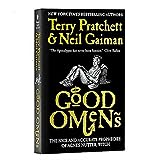 Good Omens: The Nice and Accurate Prophecies of Agnes Nutter, Witch (Cover may vary)
$8.99
Check It Out on Amazon!

Good Omens was released as a collaboration between Terry Pratchett and Neil Gaiman, two absolute titans of the fantasy and sci-fi genres. Although the story is more comedic fantasy horror than sci-fi, there is a lot for fans of end of the world tales to enjoy here. As one would expect from a Pratchett story, there is a lot of humor and irony to be found here. If you want to explore the end of the world due to the son of Satan through a comedic lens, Good Omens is your best bet.

Although David Brin released Earth back in 1990, and set it five decades in the future, it came to be eerily prophetic a lot sooner than expected. The plot tells the tale of an artificial black hole which has been unleashed and is causing havoc on Earth, threatening humankind’s very existence. Earth is considered remarkable due to the number of predictions Brin made which came to be true, including modern Internet, malicious email, and the possibility of humanity creating artificial black holes. Earth’s excellence is also shown through its Hugo and Locus award nominations.

Although Stephen King is perhaps best known for what can be termed ‘small town horror’, The Stand is positive proof that he can turn his attention to the world ending with equal effect. It is a truly epic tale which many die-hard King fans class as their personal favorite. The story explores a post-apocalyptic society divided, and the way in which survivors band together, and factionalize, often to devastating effect. A gripping and memorable tale which demands to be reread.

​The Only Ones
​Aaron Starmer

The Only Ones is a post-apocalyptic tale which deals with a survivor immune to the pandemic which has devastated the world. Many readers have compared this book to Cormac McCarthy’s The Road, as it explores themes of survival and parenthood. Sci-fi fans will find fascinating the fact that the parental relationship in question is based around the concept of cloning. The Only Ones switches back and forth between introspective reflection and exciting scenes of end of the world action. Intelligent and intellectually stimulating end of the world sci-fi.

What are some of the events that incite end of the world fiction?

The types of apocalyptic events found in end of the world fiction are incredibly varied. Interestingly, the particulars often depend upon the time period in which the book was released, with the fears of the era being reflected.

Broadly speaking, end of the world events can be divided into two types. Those which humanity have self-inflicted, and those which are inflicted upon us by outside forces.

So what are the common end of the world events found in this type of science fiction?

Some of the most incredible end of the world stories combine elements from each of the above, with Lucifer’s Hammer being a particularly notable example. No matter what flavor of worldwide destruction you seek, you’re sure to find a story that satisfies.

What are some of the psychological and human themes found in end of the world sci fi?

Without a strong psychological impact, end of the world stories lose their depth, and readers quickly become bored.

So what are some of the common psychological areas of exploration end of the world books deal with?

Ultimately, for an end of the world book to be a true classic, it needs to combine an awesome apocalyptic event with gripping psychological exploration. The stories on this list offer both in masterful measure.

Get These Best End Of The World Books for Free!

Ready to witness the glorious end of the world in one of its many guises? Here are some ways of doing that without paying a penny: