There are a lot of Dune books… I mean a lot! And in this post were going to try and rank the best Dune books from worst to best.

Now, we are actually going to divide this up into two sections, because there are two major groupings of Dune books.

First you have the original six books written by Frank Herbert, and then you have multiple series written by Herbert’s son, Brian Herbert, in collaboration with Kevin J. Anderson. There are a lot more in this latter section of books, so we will rank them based on each series, rather than on a book by book basis.

With the recent film released in 2021, starring Timothée Chalamet and directed by Denis Villeneuve, interest in Dune has skyrocketed. But we want to make sure that you read the best of the best, which is why we put together this post.

We hope you enjoy this definitive ranking (at least in our opinion) of all the Dune books.

The original novels written by Frank Herbert are in a league of their own, and we would not even try to compare the least of them to any of the expanded universe novels.

However, some of them are better than others, so let’s look at which ones we would recommend the most.

Heretics of Dune is the second-to-last of the original novels. It takes up several thousand years after the previous book, God Emperor of Dune, and the universe has been thrown into chaos since the events of that book.

It shows primarily a struggle for survival between two major factions: the Bene Gesserit and the Tleilaxu. Their struggle makes up the bulk of the conflict in this book. And while it has more action than some of the previous books, a lot of it is hard to follow, and some of the characters are harder to identify with.

Even though it is one of the least of our favorites, it is still miles above most science fiction books.

Chapterhouse: Dune
$9.99
Check It Out on Amazon!

Chapterhouse: Dune is the last book written by Frank Herbert, though it was not intended as the last book in the series. Herbert died before he could complete it.

Eventually his son, Brian Herbert, would go on to finish the series with the help of Kevin J. Anderson, and based on his father’s notes. For a long time the cliffhanger ending of this book was a source of much debate. In fact, it is this rampant speculation that really made this book stand out, even though it suffers from some of the problems of the previous book.

In a lot of the rankings I saw on the Internet, this one is often ranked last. And while it does do a lot more talking, and has a lot less action, I would still rank it as one of the more profound books in the series. It really digs deep into the philosophy of Duke Leto II and the implications of everything he has done to the universe.

For those who like science fiction that leans heavily on its ethics and moral philosophy, this may be the one for you. However if you are looking for a action-packed science fiction story, perhaps this is not your cup of tea.

Nevertheless, it is still a great story.

Dune Messiah was the sequel to the original Dune, and largely ties up the storyline and character arc for Paul Atreides, the main character from the first book.

The story really grapples with the idea of charismatic leaders and the problems that they can cause, even when they are well-intentioned. And the only reason we don’t rank it higher on this list, is because the two above it are just that good.

Children of Dune is the third book in the Dune series, but it is second only to the first Dune novel.

The story follows Paul’s twin children, Ghanima and Leto Atreides, who are especially gifted children, given that their father was who he was.

In particular it documents the rise of Leto to becoming the God Emperor of Dune. It’s got just as much philosophical underpinnings, political intrigue, and action to make it one of the best science fiction books of all time. That’s why it comes second on this list.

But even with all that, it still can’t compare to…

Dune is undoubtedly the best of all the Dune books, original and expanded. The story follows Paul Atreides as he is thrust into a large political web.

But unbeknownst to his enemies, Paul is something of a prophesied Messiah, with talents and abilities that he himself does not yet understand. And when dark forces attack his father, Duke Leto Atreides, he has to rely on these innate abilities, along with good friends like Duncan Idaho, to stay alive and eventually lead a rebellion on the planet Arrakis.

This is the book that started it all, and it is still by far the best book on the list. It has action, political drama, tense survivalist moments, and thrilling sci-fi spectacle. It has everything you want in a science fiction novel, and absolutely deserves to be number one.

If you can, I recommend reading the book first. But if you prefer to watch a movie, the one directed by Denis Villeneuve is the best. The film directed by David Lynch has its pluses, but overall is a sad comparison to the newer movie. And that’s not just because of improved technology.

All right, now that we have the main books out of the way, what about all of the expanded universe novels written by Brian Herbert and Kevin J. Anderson?

These books are very good, but also have a different style from the original books. They are meant to be a more pulp-like, enjoyable read, lacking a little bit in the deep philosophical thought of the original six books. But they still are good books and tell great stories, so we thought we should mention them.

Here are each of the expanding universe series, ranked from worst to best.

The Heroes of Dune

Heroes of Dune
Check It Out on Amazon!

The heroes of Dune series takes place in between the original Dune novels, and consists of two books:

While these books do have some ups, they are largely uninteresting compared to the other books on this list. They offer little in the way of character development, and since they take place between the books, there is little plot of significance that can take place in that timeframe.

These could be interesting to diehard fans of the saga, but not one we would recommend for everybody.

The Caladan Trilogy takes place in the year prior to the original Dune novel. While a lot of people may find this compelling, I found it largely unnecessary.

The authors had already covered a lot of the prequel territory in the Prelude to Dune trilogy, and so I felt that this trilogy was retreading a lot of the same ground, and did little to add to the overall saga.

It felt like they were scraping the bottom of the barrel for this one. While the writing is still fine, I would rank it as less important compared to the other series.

Dune Sequels
Check It Out on Amazon!

When Brian Herbert and Kevin J Anderson were writing the Prelude to Dune trilogy, they discovered some notes from Frank Herbert that outlined the broad strokes of what the final Dune book would look like.

The Dune sequels are made up of two books:

At last there were some answers to the cliffhanger ending of Chapterhouse: Dune. And while I’m sure some people were dissatisfied with this ending, these two books do provide definitive closure to the series as a whole. Plus, it was based on Frank Herbert’s notes, so we do know that at least the basic plot was his.

The Legends of Dune Trilogy

Legends of Dune
Check It Out on Amazon!

The Legends of Dune trilogy is a series of books that goes back very far in the timeline, back to something called the Butlerian Jihad, a conflict with robots that is largely responsible for the state of the galaxy when we enter the first original Dune novel.

This series consists of three books:

Of the expanded universe, this is one of the few that I would call required reading. The story of the Butlerian Jihad is an important one within the lore of the Dune universe, and the books themselves are pretty good.

While I would not rank them as high as the two trilogies that follow on this list, it is still one that I strongly recommend for anyone who wants to read up on the history of Dune.

Great Schools of Dune
Check It Out on Amazon!

The trilogy consists of three novels:

The trilogy really grapples with issues like science and religion, and the unsteady balance between the two. In the wake of the war against thinking machines, two highly opposing factions have arisen, and this is the story of their conflict.

I honestly thought the storytelling in this trilogy was at its best for these expanded universe novels, and is definitely one that I recommend. The only reason that I don’t recommend it first, is because it is a sequel series to the Legends of Dune trilogy, and you should probably read those first.

The Prelude to Dune Trilogy 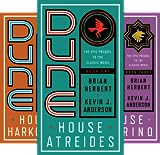 Prelude to Dune
Check It Out on Amazon!

Last, but not least, we have the Prelude to Dune trilogy. This is the series of books that outlines all of the backstory behind the original Dune novels.

It gives us fully fleshed out stories behind Duke Leto, the Lady Jessica, and the Baron Harkonnen.

This series consists of three novels:

Not only are these books extremely faithful to the world building and vision set out by Frank Herbert, but they are decent books in their own right. It’s nice to get more of the story of Duke Leto, given that we don’t get much of him in the original Dune, but what we do get is memorable.

All in all, I definitely recommend reading this trilogy first if you are looking to dig into the backstory of the original Dune novels.

Which One Should You Read First?

You should definitely read the original Dune novel first, as it set the stage for everything that came later. It’s also, by far, the best book.

If you’d like to dig deeper, but don’t want to read everything on this list, then I would recommend reading the first three books: Dune, Dune Messiah, and Children of Dune. These are the best books, and will feed you the most important stories. They are also isolated stories, so you won’t be missing much if you don’t read on.

Of the expanded universe novels, my favorites are the Prelude to Dune series, as well as the Legends and Great Schools of Dune series. Additionally, I would read the two sequels if you have read all six of Frank Herbert’s original books.

I hope you enjoyed this look at the best Dune books, and I hope this guide was useful for you. Please let us know if you have any questions, and which Dune book is your favorite. We’d love to hear your feedback!